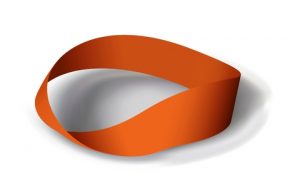 In an unusual twist – somewhat analogous to a mobius strip – I conducted campaign planning interviews for the same project for the same hospital, albeit two years apart. Why? The expansion under consideration was put on hold soon after the interviews were completed and analyzed in mid-2009. The project was brought to the front burner again in mid-2011. Enough time had passed and the organization needed to update its awareness of what was on the minds of its key supporters to relaunch the project. After all, there were major environmental changes during the intervening period, i.e., the great recession.
During both rounds of interviews, I had the pleasure of speaking with a very prominent donor who supports numerous domestic and international philanthropic organizations and projects. In 2009, (let’s call her) Lena was reeling about the economy – not so much because she was concerned about her wealth or her assets, but because she “couldn’t see the future” and she didn’t have a good handle on her “position.” Lena was addressing her liquidity, the trajectory of her investments, and her strategy of honoring existing pledges and making new ones. She wanted to support the hospital and the project, but was not able to make any commitments for the foreseeable future.
Fast forward to June, 2012. I met with Lena again; we both felt like we had just spoken a few months ago. Some things had changed, while others had not. The economy remains fluid and the future is still not as clear as we both would like. But Lena now felt she had a better understanding of how her finances and giving could be most impactful in today’s “new normal” economic climate. But there were new issues on her mind.
While still concerned with the national financial situation, she seemed even more agitated about state and federal government. She expressed concern about lawmaker’s reactive and ill-considered policies that appear to be jeopardizing the recovery, and the volatile state of healthcare policy and the healthcare “system.” (Personally, it seems that healthcare is anything BUT a system here in the USA…)
Lena’s sentiments truly represent a greater “chicken and egg” scenario – not a “dodge” to avoid a gift commitment. The fluid state of the economy, uncertainty about healthcare priorities, and widely divergent political viewpoints are all preventing hospitals and many other NPOs Lena supports from doing meaningful long-range planning. But, without a long-range plan, Lena – and other sophisticated and generous donors like her – are reluctant to make a significant investment in their favorite nonprofit organizations. The uncertainty that consumed donors in 2009 is now again a factor for NPOs in 2012.
The ripple effects of insecurity, and change, in the healthcare industry can be felt on the micro and macro level. Over the past 24 months, Copley Raff saw two of its hospital system client’s transition to for-profit status. Our company also recently completed a comprehensive assessment for another New England based hospital system; this study concluded that the organization needed to start looking for either a strategic partner or a buyer right away. And now we can add in the passage and constitutionality of the Affordable Care Act and its mandate to create Accountable Care Organizations (ACO). It is inevitable that many of these ACOs will be anchored by hospitals and integrated health systems. For more on the role of philanthropy and ACO’s please click hereto see my article in Becker’s Hospital Review.
And now back to the realities of today. The no longer mothballed hospital campaign is moving forward today in this imperfect environment – because there is no alternative. Loyal supporters are stepping up to help ensure the availability of high quality healthcare in their community. And I am confident Lena will be among them.
Your takes:

For more information about Copley Raff and its spectrum of not for profit consulting services, please see www.copleyraff.com. Have a development, executive recruitment, or campaign strategy or management challenge? Let’s talk! Click here to connect with Rebekah Kaufman, Director of Consulting Services at CRI.