An Ethical Dilemma – What Would You Do? 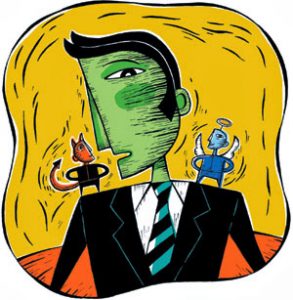 Do you have a nose for finding malfeasance? Or sometimes does it hit you right in the nose and you are faced with some hard choices. Life experiences do make you sensitive to the signs of something being amiss.

20 years ago, after moving from Portland OR to Boston to take over the statewide chapter of the Juvenile Diabetes (Research) Foundation, it became apparent that the caretaker board chair was hiding financial information from me. I needed to estimate cash flow demands and my pushing for financial data began to push him over the edge. Long story short the chairman and his wife were embezzling lots of small gifts from the JDRF chapter. They intercepted small and large checks and deposited them into hidden JDF accounts they created and controlled. I found 9 illicit accounts and estimated they had stolen more than $400,000. The state attorney general convicted and incarcerated them.
Once you have smelled the scent of fishy money handling, you tend to smell it in more and more places. Recently, Rising Tide Direct, our direct mail company, was contacted by a religion-based children’s welfare organization in the Midwest to talk about doing their direct mail program. We asked for some basic performance data, and the data showed annual direct mail income of around $7 million over each of the past several years.
Further due diligence brought me to the organization’s federal 990 filing for the periods coved by the direct mail results, and they showed total contributed revenue of around $5 million. Now there is no reason for the mail results to be inflated for our benefit, and no good reason to deflate the 990 figure. So where is the $2 million? As fate would have it the organization has cut off communication with us.
So our choices appear to be:
1. Walk way and move on to the next engagement opportunity.
2. Bring the matter to the attention of the state attorney general and let them figure it out.
3. What do you think we should do??????????
For more information about the April 11-14, 2014 PLAN-MGO Event and Copley Raff and its spectrum of consulting services, please see http://www.planmgo.com and www.copleyraff.com. Follow CRI on Twitter @copleyraff.