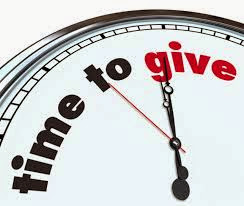 It is a given in the advancement world that year-end is our busiest time of year. You make or break your annual giving budget by what is given the last six weeks of the year.

I have always found this phenomenon to be a bit of a mystery and paradox. Let’s examine why there is more giving at year-end.

Tax deduction: Giving before the end of the year to get tax benefits is probably the most common explanation for year-end giving, but is the least plausible reason. A gift given on February 2 will be just as deductible as the gift made on December 31st. This presumes the donor itemizes his/her taxes, which less than 40% of tax payers do. (See state by state breakdown) Though the higher your tax bracket (and wealth) the more likely you itemize. It is also well known that studies indicate tax benefits usually rank around 7thin terms of donor giving motivation.

Season of giving / religion: The holiday season has become synonymous with giving gifts to loved ones as well as to the less fortunate; as it has become synonymous with conspicuous retail consumption. When I was working in the early days of food banking the joke was that the public remembered people were hungry only during the holidays, with money and offers from volunteers poured in. After the new-year it was back to business as usual.

Guilt: Let’s face it, if you are spending all this money on gifts for relatives and loved ones, the least you can do is help out a charity and the people they serve.

More asking: Which came first the chick or the egg? Are we asking more at year-end because people give more then, or are people giving more at year-end because we ask more often? Our efforts are also supported by more television and social media promotion of charitable giving. I have also noticed of late that there are more cause-marketing campaigns supported by corporations that spend millions to promote cause campaigns that will raise fewer millions to support benefiting charities. And most recently, there is now a proliferation of crowd funding websites that provide vehicles for online giving for charities, the needs of individuals and for entrepreneurs seeking capital.

Giving Tuesday: I single out Giving Tuesday, a growing movement and awareness started by the 92ndStreet Y (full disclosure, a client of Rising Tide Direct) that promotes online charitable giving the Tuesday after Thanksgiving. Giving Tuesday follows Cyber Monday and Black Friday. There is not yet evidence that this worthy effort actually increases net philanthropic giving, but it does further concentrate giving at year-end.

Habit: All of the above have helped to create giving habits in millions of donors. As we all know, charitable giving is a habit we want to encourage and provide opportunities to nurture.

The paradox for me is that the availability of disposable cash in the pocketbooks of individuals, with which to make contributions, is at its lowest in December and when credit card bills arrive in January. While there are exceptions for those who still get year-end bonuses and have ample disposable income, you would think that people would have more money to contribute in the spring and summer when those tax refunds arrive.

1. Determine what motivates your donors to give to your organization, and try to work it into the year-end donor mindset.

2. Does it make sense for your organization, given the nature of its work, to try and build giving habits with your donors to give at times other than year-end?

3. Reach out to your higher net worth donors and make the case that their year-round giving is important to your organization.