Disagreements Strengthen Friendships – If We Get Out of Our Bubble 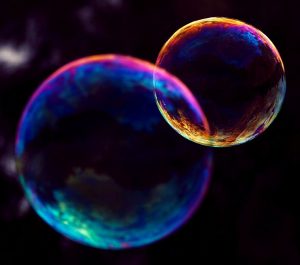 I have had a 15-year friendship with a fellow board member of a biomedical research nonprofit we support. Ben was a very successful business man, now retired, and is politically conservative. My political leanings are decidedly progressive.

Over the years, Ben and I have had fun sparing over the political issues of the day, spanning Bush, Obama and Trump. Despite our very different views of the world and the substance of the events of the day, we enjoy our jousting and finding common ground.

Collectively, we all need more of this give and take, especially with volunteers and donors who may not share your political perspectives. We need to avoid that gravitational pull we all experience to associate with people who think the way we do, because if we don’t, we limit our horizons and appreciation of different points of view. Now, more than ever, we need to cross-pollinate thinking, and get along.

My Exchange with Ben

I want to share with you a recent exchange I had with Ben to illustrate how two smart, caring and well informed people can view the world differently, exchange perspectives, and be bonded more strongly for it.

Two weeks ago, out of the blue, Ben sent me an email with the following:

I felt compelled to respond.

Ben, Unfortunately, like every time Trump speaks, nothing attached is true.

Border: Border security was already at an all-time low when Trump took office. The border wall is not a one-time expense. It will take billions annually to keep it up.

Economy: The economy is showing signs of slippage already; better trade deals is a myth; and, there is no money left for infrastructure. Every past democratic president in the last 40 years has reduced the debt and every republican increased it. Just wait for when interest rates have to rise to attract investors in our debt and see the s**t hit the fan.

Dreamers: Without dreamers and immigrants our economy will suffer and Trump wouldn’t be able to find help to run his hotels, golf courses and buildings. The US Chamber of Commerce opposes Trumps policies on this.

Tax reform: Tax “reform” will speed the US bankruptcy and tax cuts will not be offset by economic growth, and yet republicans voted down safeguards in the event economic growth didn’t work. Cowards.

Trump’s wealth: Chances are Trump’s net worth is in the red, but since a lot of his debt is off book in Moscow, it is hard to tell.

Larry, I believe in facts. It is true that much of Trump is blather. I hate it too, but “nothing attached is true” is not accurate as well.

Boarder: Border security has tightened under Trump. I would agree that the border wall is not a one-time expense.

Economy: The economy by every matrix as well is better. Higher GNP, lower unemployment particularly in the black and Hispanic sectors. Food stamps are down, people coming back into the work force, stock market up substantially –all FACTS. Also, real wage growth. Better trade deals yet to be seen but we should be able to do better than have China’s duty on automobiles be 10X our duty.

National Debt: As far as every Democratic President has reduced our National Debt where were you when it went from $10Trillion before Obama to $18Trillion when he left, More increase then All PREVIOUS PRESIDENTS!! Obama had the benefit of virtually zero interest rates yet his recovery was the weakest since WW 2.

Guns: Gun facts- The two cities with the most strict gun laws have the highest rate of violence- Chicago and Baltimore.

Just the facts Please. Thanks, Ben

Ben, Thanks for your response and our mutual respect for facts and recognition of reality. The question is which facts we use to make our arguments. Allow me to respond.

Border security has tightened under Trump: Yes it has, even though Obama was “deporter in chief” and net migration is negative. Got to keep those campaign promises.

The economy by every matrix as well is better. Higher GNP, lower unemployment particularly in the black and Hispanic sectors, food stamps are down, people coming back into the work force, stock market up substantially:

Agreed, GDP is trending up in Q2 and Q3 as the economy reaches full employment.

I agree with these facts, but upon closer examination we see below that private sector employment is flat. Beside some noise about deregulation (many of the regulations were already slated for removal by Obama), I cannot site one Trump policy that positively affected the Obama impact on jobs and the economy, nor is directed to helping employment for black and Hispanic sectors.

With a stronger economy and more employment, food stamp use is indeed down. That trend began in 2014 and continues. 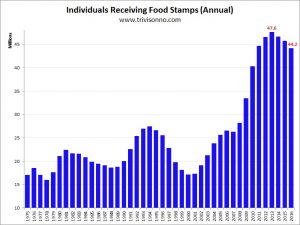 The market is up since Trump took over. The S&P 500 monthly index value is up roughly 17.5%, which is nothing to sneeze at. Unfortunately, only 54% of Americans own stocks. 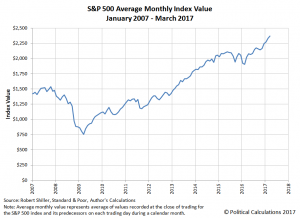 Also, real wage growth: Not so much. See below. 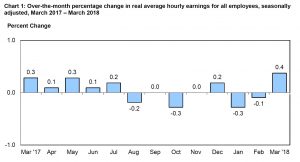 Better trade deals yet to be seen but we should be able to do better than have China’s duty on automobiles be 10X our duty: I hope so. But who is there in government to negotiate these deals. There are a lot of empty chairs and a serious brain-drain.

As far as every Democratic President has reduced our National Debt where were you when it went from $10 Trillion before Obama to $18 Trillion when he left, More increase then All PREVIOUS PRESIDENTS!!

Let’s not forget what Obama inherited from Bush: massive tax cuts, two wars and a cratering economy. The important variable to look at is how did Obama tame and then reduce annual deficits. Though the total debt had to grow in order to save the economy – he then turned it around. And now, the new tax cut bill will grow annual deficits as far as the eye can see and was done, without precedent, during strong economic times. This sort of stimulus should be saved for when we need it. 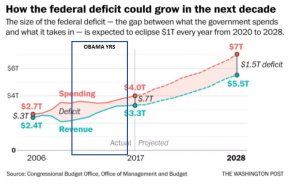 Obama had the benefit of virtually zero interest rate yet his recovery was the weakest since WW 2: Thanks to Mitch McConnell’s malignant obstruction and the slow growth of international economies. The Fed did their job. Thankfully they are independent from Congress.

I would agree that the border wall is not a one-time expense.

Gun facts- The two cities with the most-strict gun laws have the highest rate of violence- Chicago and Baltimore: There is a linear relationship between stricter state gun laws and gun violence. (https://www.usatoday.com/story/news/nation/2018/02/21/states-most-and-least-gun-violence-see-where-your-state-stacks-up/359395002/). Chicago is 30 miles from Indiana which ranks 18th for the most firearms deaths / 100,000. Maryland ranks 32nd. It is well known that most gun violence in Chicago involve guns from out of state.

Remember, Trump offered 1.8 million dreamers a way to citizenship in exchange for Border wall: He also offered to sign “whatever Congress would give him”, which he torpedoed two days later. Trump also didn’t have to start this in the first place with rescinding of Obama’s executive order… a manufactured crisis.

Always a pleasure my friend.