Wisdom From My Grandfather – and a Warning 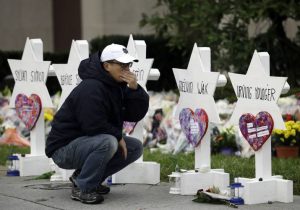 My grandfather Jack and I spent a lot of time fishing when I was growing up. He was a refugee from the Jew-rousting pogroms in Russia during the Russian revolution in 1917. He immigrated to Chicago and started a family, supporting it by delivering bread to homes.

Jack shared a story with me that has resonance today and has never left me. He delivered to a German immigrant in the late 1930’s, and in a conversation, Jack shared his glee to be safe from persecution in America. His customer responded, “That is what we thought in Germany, and then all of a sudden it wasn’t safe anymore, and my family had to flee”. She said to my grandfather, “Never let your guard down”.

The recent massacre of eleven Jewish worshipers in Pittsburgh, the vile hatemongering of the Trump administration and complicit silence by Republican party leaders… has my guard up.

I will not use this space to rant about the rapid decline of our civil society, but rather to thank the forces that are fighting back on our behalf at this soulless scourge. We should all be thankful that many of these forces for good, representing all of us and our many stripes, are nonprofit stakeholder organizations.

Organizations including the Southern Poverty Law Center, American Civil Liberties Union, Anti-Defamation League, Lambda Legal – along with houses of worship across the nation and so many others – need our support now more than ever. We clearly cannot count on our representative government to adjust quickly enough through elections to stem the hatred from within, so we must rely on nimble, focused and energetic public service organizations, and their volunteer and executive leaders, to sound the alarm and use the levers of government and social action to be a bulwark against hate and division.

We are all heartbroken over the massacre in Pittsburgh, mass assassination attempts against Trump critics, government sponsored kidnapping of asylum-seeking refugee children, discriminatory immigration and civil rights policies, and the blind eye of government. To be sure, hatefulness, fear and self-supremacy have been part of our body-politic for generations. But it is only recently that the advocates for and embodiment of these unfortunate mindsets are being embraced at the highest level of government.

We must continue the work we do – to make real the important missions our organizations represent – and never let our guard down. Be sure to VOTE!

Copley Raff’s mission: Every interaction is to help nonprofit organizations fulfill their missions by meeting ambitious goals, aligning their leadership, elevating fundraising, and activating the brilliance of their teams. It’s a bold promise but one that we know will serve you and your organization’s mission in a way that will deliver tangible and meaningful results – the kind of results that make a real difference!