Do Nonprofit Employees Have an Edge on Job Satisfaction? 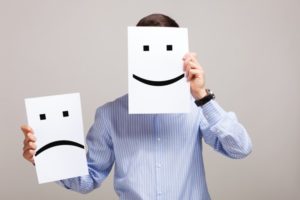 We all want to be satisfied in our job and to look forward to the work ahead when our feet hit the floor in the morning. The people I meet who once worked in the private (shareholder) sector and migrated to the nonprofit (stakeholder) sector often say they did so because of a lack of job satisfaction in their prior position. “It was always only about making money.”

There is a central reason for this migration. People are looking for deeper meaning in their work. Afterall, our profession involves most of our waking hours… and life is short. A recent article in the NYTimes called The Future or Work quotes a Harvard graduate who makes more than a million dollars a year as saying “I feel like I’m wasting my life. When I die, is anyone going to care that I earned an extra percentage point of return?” “If you spend 12 hours a day doing work you hate, as some point it doesn’t matter what your paycheck says.”

Despite six straight years of improvement, job satisfaction levels in 2016 are still well below the levels seen in 1995 and 1987. In fact, the levels in 1987 and 1995 are significantly above any measures since 2000. 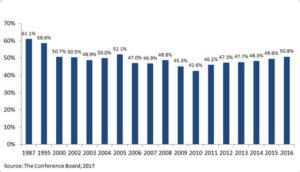 2. A sense your job will not disappear unexpectedly and through no fault of your own;

3. The ability to control your time;

4. The authority to act on your special expertise; and,

5. To be able to work along side others that they respect and who respect them.

Most importantly, workers want to feel that their labors are meaningful.

The Conference Board study notes that job satisfaction is highest among employees aged 35 to 44, at 50.3 percent, and workers nearing retirement — aged 55 to 64 —remain substantially less satisfied compared to the prerecession years.

Nonprofit vs. for-profit and government employees

Ninety-seven percent of nonprofit workers surveyed said they feel they accomplish something worthwhile through their jobs.

For-profit workers certainly have jobs that are meaningful or provide meaning to them or may benefit society. But the data appears clear that people who work for nonprofits have a better chance to find meaning in their work, because their organization’s very existence is to provide public benefit and to make the world better.

All three sectors – nonprofit, for-profit and government – are vulnerable to changing economic conditions, job downsizing and co-worker disharmony. But all things being relatively equal, working in the nonprofit sector gives you a better chance at job satisfaction and a real sense of meaning.

We are now living during a strong economy with almost full employment. Job stability and larger paychecks are increasingly the norm. But when the economic cycle inevitably changes, nonprofit workers have a better chance at keeping meaning in their work.

1. Take heart that your organization and the work you do in support of its mission are important and meaningful.

2. If #1 is not true, find other work while the economy is strong.

3. Take time to reflect on the meaningfulness of your work and keep it top of mind.

· To the Entrepreneurs Among Us

· Be In the Moment…to Get Hired