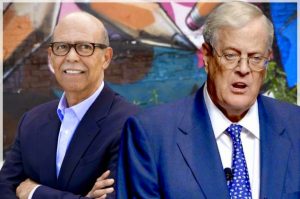 It is a true test of mission resolve to say “no thank you” to a donor offering a large gift, when that donor’s livelihood is based on work antithetical to your mission, or who spends orders of magnitude more money fighting the very reason your organization exists. There is no better example than the Koch Brothers and the use of their fortune for philanthropy and politics.
Through Koch Industries, various Koch controlled foundations and personal giving, the family has given hundreds of millions of dollars to more than 250 colleges and universities, cultural institutions, medical research, environmental causes and many more.
The Koch empire has also spent what appears to be considerably more money, annually, trying to get political candidates elected whose positions are in direct opposition to the missions of the nonprofit organizations they support.The Koch’s are the primary supporters of Tea Party and ulta- conservative candidates, who have managed to become an influential enough minority in Congress to effectively stall, gut or kill many legislative initiatives that would support the missions of organizations they support philanthropically. For example:

There have been epic efforts by Republicans to stop and then to repeal the Affordable Care Act which has enabled millions more people to have access to ambulatory medical care.

Significant efforts by Republicans to eliminate the Environmental Protection Agency have resulted in a budget decline of $2.1 billion or 20% since 2010.

There is no doubt that the Koch family has spent billions of dollars over the years to school students, cure diseases, cultivate artists, and clean the Earth…and to reverse all of the above.
The Koch brothers are a microcosm of a dilemma that is faced by many nonprofit organizations. Do you take sponsorship corporate gifts from companies that believe in discriminating against certain classes of employees, or make products that harm people? Do you take program gifts from donors that insist on certain conditions that do not support your mission? Do hospital fundraisers take major named gifts from attorneys who make a living suing physicians for malpractice? Do human services fundraisers take major named gifts from slum landlords? Should a donor’s motivation for giving, like public relations, or source of wealth factor into your decision to accept the gift?
It is hard to say “no” if you do not have policies in place that give guidance to certain situations, or at lease describe a formal review process.
Your takes:
1. Review your gift acceptance and recognition policies to ensure there is a process for gifts with special circumstances.
2. Before pursuing a prospective donor, consider potential mission conflicts that may arise.
3. Consider potential repercussions from other donors when accepting a significant gift from a controversial source.
For more information about Copley Raff and its spectrum of consulting services, please see www.copleyraff.com. Follow CRI on Twitter @copleyraff.