Are Nonprofits Getting a Bum Rap? 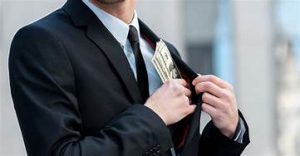 It happened again. An article in the Sunday Boston Globe, January 30, 2018, “Employee theft ‘shockingly common’ at nonprofits” tries to make the case and give the impression that employee theft is a scourge effecting nonprofit stakeholder organizations more than private sector shareholder businesses.

The argument is that nonprofits are under staffed with people who are under paid and over worked and run by people who are dedicated to the cause but are not business people. The article cites anecdotes and nonprofit reports to the IRS of “unauthorized diversion of assets” – usually theft and embezzlement – in their federal 990 filings.

Pardon me for defending my industry, but I find this premise insulting and not supported by the facts.

I want to share a personal story and statistics about employee theft and lay to rest the insulting perspective that nonprofit organizations are somehow inferior to the management and integrity of for-profit businesses.

To make a very long story short, in 1994 I uncovered significant embezzlement by a trusted volunteer and his wife when I took over leadership of the Massachusetts chapter of the Juvenile Diabetes Research Foundation.

I presented the situation at a JDRF international board meeting, which was attended by several CEOs and senior executives of Fortune 500 companies. After describing how this theft was perpetrated, almost to a person, the executives in the room acknowledged that theft and embezzlement are part of “normal” business for them.

They were swift to decide how to deal with the crime and breach of trust… sue the couple to recover the stolen funds and informed the authorities, who prosecuted the individuals.

Let’s be clear, where there is money and things of value, there will be theft.

Even the most secure financial systems will spawn more creative ways to steal.

Fortune 500 companies presumably have the best financial controls, and the 25 million small businesses in the US, including nonprofits, likely do not. One would expect, then, that employee theft, if primarily the domain of these small businesses, would be fairly small.

National employee theft numbers are staggering. According to a Statistic Brain study, $50 BILLION ANNUALLY is stolen by employees, representing 7% of total revenues and the cause of 33% of bankruptcies. So, on the contrary, theft is very much BIG BUSINESS.

Furthermore, when we drill down on the amounts stolen per incident, the data skews heavily towards larger amounts that one would more closely associate with larger, for-profit companies -63.1% from thefts of $100k to $1M+. It is easy to single out the nonprofit industry for theft, but the numbers are just too big to make that assumption. On the contrary, the scale of theft per incident suggests more elaborate white-collar crimes committed by management of larger, for-profit companies. 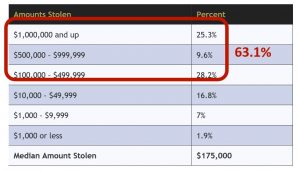 It is also important to remember that nonprofits are more accountable to the public to disclose employee theft, because these funds involve the public’s trust. They are tax deductible contributions and often include government funds. That is why the question about “unauthorized diversion of assets” is asked on the federal 990 filing.

For-profit businesses, on the other hand, are under no obligation to report employee theft. This is especially true of the 25 million for-profit small businesses. The local grocery store is not going to issue a press release about embezzlement by their bookkeeper or theft by their cashiers. That would not be very good for business or employee relations. Furthermore, the large for-profit, shareholder company is going to do everything it can to prevent bad publicity.

The playing field is not level, and nonprofits are more exposed to being perceived as more vulnerable to employee theft – when the data suggests otherwise.

So, the next time you encounter a person or media article that paints nonprofit corporations as inferior on business practices to for-profit corporations, inform them that is not supported by the facts, and remind them that nonprofits are held to a higher standard of ethics and transparency, something we can all support.

On a related point

The other myth is that executive turnover his higher for fundraisers than for similar private sector executives. I dig into this fallacy in my post We Need to Change the Conversation.