What Makes People Give in the Face of Disasters? 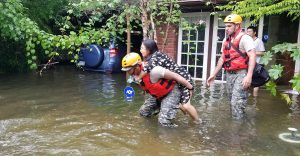 There have been a number of major disasters in the US during the past six years. Some have garnered immediate appeals for funds and others have not. The following is an attempt to gain insights from an examination of twelve mass-shooting & human-made incidents and five natural disasters since 2012 to determine what might influence fundraising to help victims.

I have identified six factors that likely contribute to the level of fundraising for a given disaster:

1. The number of people injured or displaced, and amount of property damaged
While natural disasters result in countless numbers of people being hurt or displaced over a large geographic area, their suffering is communicated en masse to the public. Nonetheless, natural disasters attract the greatest public response for reasons described below. For victims of shootings or explosions, the injured are typically individualized in media accounts, as was done for the Boston Marathon bombing and Las Vegas shooting, and are therefore more compellingly portrayed, supporting greater fundraising.

Curiously, Hurricane Harvey, which incurred the most property damage than the other hurricanes by a factor of two, raised 10 times the funds for relief support. This may be because the flooding was a long-duration event and befell major metropolitan areas.

2. The intensity and duration of media coverage
High intensity natural disasters frequently are long-duration events, with coverage before, during and afterwards. For mass shootings, the post event coverage often addresses related political issues, like gun control and terrorism, and less so about the dead and injured. For instance, there were more funds raised following the Stoneman Douglas High School shooting to support gun control rallies being organized by the students, than for the victims of the shooting. Shootings/bombings that occurred in more affluent communities – Boston, Sandy Hook, Las Vegas – raised far more funds than similar shootings in less affluent communities.

3. The size of family and networks of those effected
Natural disasters typically affect hundreds of thousands of people and therefore touch the lives of millions of friends and relatives who have a personal interest in helping those effected. Mass shootings and other human-made disasters typically affect a relatively small number of people, reducing the multiplier of personal networks.

4. Centralized or decentralized fundraising portals
Natural disasters seem to always have a well-known centralized contribution collector, like the Red Cross or the One Nation Appeal by former presidents or Michael and Susan Dell efforts with the OneStar Foundations. The mass shootings that attracted the most funds had prominent local contribution collectors along with individual efforts through gofundme pages and local events.

5. Assurance the funds will be well spent
This has been a thorny problem for many years. Hurricanes Katrina and Sandy giving showed us that it is hard to quickly spend the bulk of the contributed funds on the urgent need. Some of the well-publicized stories of relief agencies still holding millions of dollars in relief aid makes those paying attention a bit more skeptical about giving the next time. This points to how important it is for organizations to communicate to their donors how and when their contributions were used, and who benefited.

6. People imagining this can happen to them
There are few places in our nation immune from natural disasters, or a crazed gunman with an AR-15. So, it is easy for all of us to put ourselves in the shoes of disaster victims, giving us a personal connection to their plight.